"Rather ought every one submit to death, than to receive

the sacrament of communion from a hand of a heretic."

The Church declares schism itself, as a heresy.

The pseudo-traditionalists/sedevacantists are DEAF to the Fact that Pope Pius XII CONDEMNED non-papal mandated "consecrations" - even for a "so called grave emergency".

Pius XII in Ad Apostolorum Principis acknowledged non-papal mandated consecrations had occurred in emergencies, saying it was "licit in PREVIOUS centuries", YET, "the Supreme Authority of the Church has long ago DECREED OTHERWISE." (See Pius' Eternally Binding: Encyclical on the Crime of Non Papal Mandated Consecrations, promulgated June 29th, 1958)

(Image of St. Gregory the Great)

Thus, Pius XII's infallible teaching absolutely annihilates groups like CMRI who sophistically try to justify their schismatic crime(s) of attempting to consecrate without a papal mandate, by saying the practice occurred in the past i.e., "in Previous centuries."

ipso facto excommunication that only the (true) Pope can lift

To attempt to consecrate a bishop without a papal mandate incurs ipso facto (automatic) excommunication. This means that the excommunication takes place by the VERY FACT of the attempted criminal/sacrilegious consecration. There need not be an accusation and trial to determine one’s guilt: The act ITSELF results in the penalty.

Under the severest censure (the penalty of excommunication): one may not participate in public worship nor receive the Body of Christ or any of the sacraments. Moreover, if he be a cleric, he is FORBIDDEN to administer a sacred rite or to exercise an act of spiritual authority. This condemnation (excommunication) applies to all who belong to, support, or condone these antipapal schismatic acts/sects. The Church declares schism itself, as a heresy. 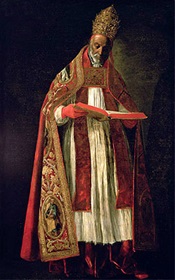 "Such should be our submission to the Church, that if we knew visibly anything to

be white, which she had declared black, we should acknowledge it black with her."