How the Best Catholic Families Can Serve the Inquisition

Many have thanked TCW for its (sanctioned) efforts to help in the reassertion of the Holy Inquisition world-wide. Here is a bit of historical background on one of the official *roles that layman had in assisting the Church [in New Spain "the U.S." 19th c.] meet out justice towards the enemies of the Faith.

TCW encourages the true faithful to read good Catholic literature on the Inquisition, which with the unpcoming Glorious Triumph of the True Papacy will be flourishing in splendor Ad Majorem Dei Gloriam (All for the greater glory of God).

*FAMILIARS OF THE INQUISITION (FAMILIARES) A separate system of secular or laypersons called familiares formed an elite group of constables that made up an inquisitorial militia. The familiars of the Inquisition, or familiares, served as a permanent force of assistants, constables, and informers for the Holy Office. In addition to aiding the officials of the Inquisition in the discovery, apprehension, and arrest of suspects, they were required to: 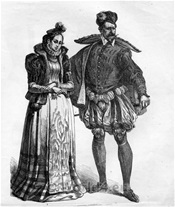 • Attend to the various tasks given to them by the inquisitors

• Denounce all suspects to the Inquisition

• Serve as bodyguards or protectors of the inquisitors

• Aid in bringing suspects to the Inquisition’s prisons

All those nominated had their family histories investigated to ensure that they were “Old Christians of good faith and customs.” The numbers of these familiars varied, but by law at least twelve familiars served in Mexico City, four familiars in the seat of each bishopric, and at least one familiar in each Spanish town throughout New Spain. (End)

Again, TCW wants to thank all those members of the Church Militant who (in the strictest of confidence) have been doing their duty of informing/reporting. May God Reward You!