(Papal Prophecy of Venerable Bernard de Bustis, 15th c.): "...near the time of the Antichrist, will come... a most violent conflict with the Roman Church such that there will be great tribulations. At this time, a schism will be produced in the bosom of the Church on the occasion of the election of the pope... there is one who will be called the true pope, but he will not be truly so. He will persecute the true pope and all those who obey him, so that the majority will declare themselves for the antipope rather than for the true pope. But this antipope will have a sad end, and the true one will REMAIN the unique and uncontested pontiff. ..."

"Violent hands will be laid on the Supreme Head of the Catholic Church. .. Yes, yes, the flock will become small." (End Times Prophecy of Bp. Wittman d. 1833)

Cardinal Johann Baptist Franzelin S.J., d. 1886 (pictured on left), considered by many as the greatest *theologian of the 19th century - on the proper understanding of the often quoted and falsely understood axiom “Papa dubius, nullus papa.”

*In 1857, Franzelin was appointed professor of dogmatic theology, at the Collegio Romano, a position he kept until 1876. Named consultor of the Sacred Congregation of Extraordinary Ecclesiastical Affairs on April 23, 1869, he served as papal theologian in the First Vatican Council and made a considerable contribution to the drafting of the constitution "De Fide Catholica". Consultor of the Sacred Congregations of Propaganda Fide, Tridentine Council, Extraordinary Ecclesiastical Affairs and 'qualificatore' of the Holy Office. Created cardinal on April 3, 1876 by Pope Pius IX, the latter appointed him prefect of the Sacred Congregation of Indulgences and Relics on March 28, 1885. His theological works are known throughout the Church for their solidity, erudition and scrupulpous accuracy.

Here's a passage from Cardinal Franzelin that discusses "the doubtful pope axiom". 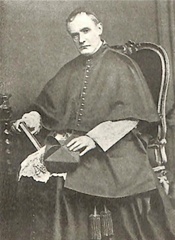 One of the largest news services in the world (The Guardian) in a 09-16-2016 article reported there are followers of Gregory XVII (& his Apostolic Succession). That's us folks ... see: http://tinyurl.com/the-guardian-news-sept-2016