In Extreme Situation(s) Priest Not Required for Marriage

The Church instructs us that an engaged couple should not delay long before marrying.

The Canons explicitly waive the presence of a priest at the celebration of marriage in specified extraordinary circumstances, but they do not, even then, relax the requirement that marriage shall be celebrated before at least two witnesses. The marriage is validly celebrated before the common witnesses only, where it is impossible for the parties to have or to approach an authorized priest, provided that either of these conditions is verified: one party is in danger of death, or it is foreseen that no authorized priest will be available for at least a month.

(Two important modifications of the "Ne Temere" are contained in this Canon, first that in danger of death marriage can be contracted without a priest before two witnesses, and, second, that in places where a priest cannot be had or the parties cannot go to him, they need not wait for a whole month, if there is good reason to judge that the same conditions will continue for a month.) 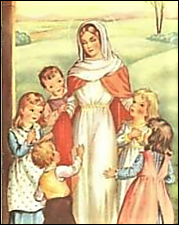 Our Lady amidst young members of the Church Militant

What a blessing True Catholic children are for a family & the world.

Note: Although the Canons grant explicitly no other waiver of celebration, the obligation of the law requiring the active assistance of an authorized priest and the assistance of witnesses is held waived, at least in a case of extreme hardship affecting the entire community. The Holy Office declared that the Catholics of China are not bound to observe the law of form of marriage as long as the circumstances created by the Red regime continue. The Private Reply, dated January 27, 1949, is published in 3 BOUSCAREN, CANON LAW DIGEST 408.

in the True Catholic Church, click here. All inquires will be held in the strictest of confidence. -TCW

The Supreme Crisis: "Yet many Christians will remember that this was all foretold of

Antichrist for centuries past and perceive the fraud of Satan and refuse to be deceived.

They will stand firm and enlighten the faint-hearted and console them."

The Church's Teaching on Courtship & Company-Keeping

St. Ambrose on a Catholic Wife's Duty in Marriage

"the Church shall be... as it was in the beginning, invisible, hidden in catacombs"

(1.) "The Present Crisis of the Holy See Tested By Prophecy: Four Lectures", by Cardinal Henry Edward Manning, 1861: His Excellency - citing the Fathers of the Church and theologians of the greatest repute (such as Aquinas, Bellarmine, etc.) - covers in detail: St. Paul's prophesied revolt and falling away from papal authority (de fide), the suppression of the Holy Sacrifice, the pope's forced exile from Rome, the destruction of neo-pagan Rome, persecution of the greatly beleaguered Church by Antichrist and finally his destruction.

Page 140. "The tenth chapter of the Apocalypse comprises, according to Holzhauser, special revelations respecting the Mighty Monarch and the Enlightened Pope, as we may reasonably assume, that God would not leave the world without some indication as to these great Renovators of an age apparently not very remote."Page 136. "A learned theologian, after perusing this Commentary, candidly declared, that "after Holzhauser all commentators on the Apocalypse appeared to him to have written like children."

Hi TCW staff, do we have to do a "remarriage" sacrament by a true priest? I do not know if a true priest is available in Indonesia. I found out about hierachy in exile a year ago but the reality just sink in me recently.

HI. Obviously their can be subjective [individually specific] matters involved with Catholic matrimony. One key question: were you a Catholic before 10/28/1958? We have access to relevant info on this important subject, if you so desire.