Prophecy of St. Nilus Given 1600 Years Ago for TODAY 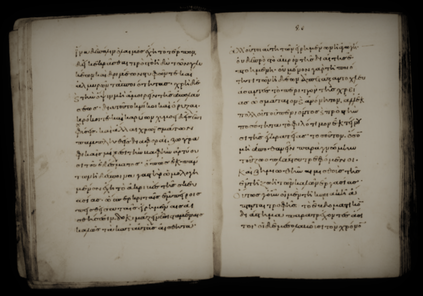 Photo of an Ancient Monastic Vellum [Calfskin] Manuscript with the Writings of St. Nilus

"The Church entered into The Apostasy at the Papal Conclave, on *October 26th, 1958. The lawfully elected Pope (formally known as Cardinal Siri of Genoa, Italy) accepted the office, but was illegally pushed aside and replaced by a Freemason - who launched a new religion opposed to The Faith." (Extract from: TCW Statement on Current Situation/Crisis of The Church)

"After the year 1900, toward the *middle of the 20th century, the people of that time will become unrecognizable. When the time for the Advent of the Antichrist approaches, peoples minds will grow cloudy from carnal passions, and dishonor and lawlessness will grow stronger. Then the world will become unrecognizable. Peoples appearances will change, and it will be impossible to distinguish men from women due to their shamelessness in dress and style of hair. These people will be cruel and will be like wild animals because of the temptations of the Antichrist. There will be no respect for parents and elders, love will disappear, and Christian pastors, bishops, and priests will become vain men, completely failing to distinguish the right-hand way from the left. 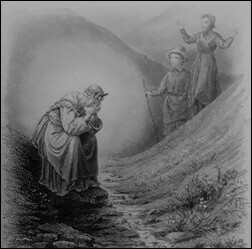 Image of Our Lady of La Salette Weeping

"Woe to the priests and to those dedicated to God who by their unfaithfulness and their wicked lives are crucifying my Son again! ... The chiefs, the leaders of the people of God have neglected prayer and penance, and the devil has bedimmed their intelligence. They have become wandering stars which the old devil will drag along with his tail to make them perish. God will allow the old serpent to cause divisions among those who reign in every society and in every family." -Our Lady of La Salette

At that time, the morals and traditions of Christians and of the Church will change [in a failure of discipline, sense]. People will abandon modesty, and dissipation will reign. Falsehood and greed will attain great proportions, and woe to those who pile up treasures. Lust, adultery, homosexuality, secret deeds and murder will rule in society. At that future time, due to the power of such great crimes and licentiousness, people will be deprived of the grace of the Holy Spirit, which they received in Holy Baptism and equally of remorse.

The Churches of God will be deprived of God-fearing and pious pastors, and woe to the Christians remaining in the world at that time. They will completely lose their faith because they will lack the opportunity of seeing the light of knowledge from anyone at all. Then they will separate themselves out of the world in holy refuges in search of lightening their spiritual sufferings, but everywhere they will meet obstacles and constraints. 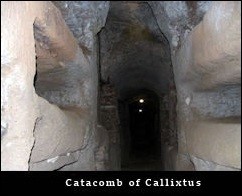 (In the Last Days...): "Then, the Church shall be scattered, driven into the wilderness, and shall be for a time, as it was in the beginning, invisible, hidden in catacombs, in dens, in mountains, in lurking-places; for a time it shall be swept, as it were, from the face of the earth. Such is the universal testimony of the Fathers of the early centuries." -Cardinal Henry Edward Manning

(Extract from his book: "The Present Crisis of the Holy See Tested By Prophecy: Four Lectures", 1861 A.D.)

And all this will result from the fact that the Antichrist wants to be Lord over everything and become the ruler of the whole universe, and he will produce miracles and fantastic signs. He will also give depraved wisdom to an unhappy man so that he will discover a way by which one man can carry on a conversation with another from one end of the earth to the other. At that time men will also fly through the air like birds and descend to the bottom of the sea like fish. And when they have achieved all this, these unhappy people will spend their lives in comfort without knowing, poor souls, that it is deceit of the Antichrist. And, the impious one. He will so complete science with vanity that it will go off the right path and lead people to lose faith in the existence of God in three hypostases.

Then the All-good God will see the downfall of the human race and will shorten the days for the sake of those few who are being saved, because the enemy wants to lead even the chosen into temptation. If that is possible…then the sword of chastisement will suddenly appear and kill the perverter and his servants… ."

(Background on St. Nilus of Sinai, Doctor of the Church): This revered Saint, was one of the many disciples and fervent defenders of St. John Chrysostom. He was an officer at the Court of Constantinople, married, with two sons. While St. John Chrysostom was patriarch, before his exile (398-403), he directed Nilus in the study of Scripture and in works of piety. St. Nilus left his wife (by mutual consent) and one son and took the other, Theodulos, with him to Mt. Sinai to be a monk. The Bishop of Eleusa ordained both St. Nilus and his son to the priesthood. The mother and other son also embraced the religious life in Egypt.

From his monastery at Sinai, St. Nilus was a well-known person throughout the Eastern (Catholic) Church. By his writings and correspondence he played an important part in the history of his time. He was known as a theologian, Biblical scholar and ascetic writer, so people of all kinds, from the emperor down wrote to consult him. His numerous works, including a multitude of letters, consist of denunciations of heresy, paganism, abuses of discipline and crimes, of rules and principles of asceticism, especially maxims about the religious life. He warned and threatened people in high places, abbots and bishops, governors and princes, including the emperor himself, without fear. He kept up a correspondence with Gaina, a leader of the Goths, endeavoring to convert him from Arianism. He denounced vigorously the persecution of St. John Chrysostom both to the Emperor Arcadius and to his courtiers.

St. Nilus must be counted as one of the leading ascetic writers of the 5th century. His feast is kept on November 12 in the Byzantine Calendar. He is commemorated also in the Roman Martyrology on the same date. St. Nilus died in the year 430.

"Our Lady said to Lucy: 'The last means that God will give to the

world for its salvation are the Holy Rosary and My Immaculate Heart.'

The words "last means" indicate that there will be no others."

"It is granted to few to recognize the true Church amid thedarkness of so many schisms and heresies, and to fewer still so to love the truth which they have seen as to fly to its embrace."

The "Fad" of Skin Mutilation

The Three Days of Darkness

What Determines Our Fate for Heaven or Hell?