"The Mind of the Church" on the Bible (Augustine/Trent) 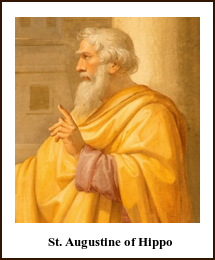 "I would not believe the Gospel unless

moved thereto by the authority of the Church."

the Church hath held, and doth hold, to whom it belongeth to judge of the true

them otherwise than according to the unanimous consent of the Fathers."

Inquisition Documents on the Reconciliation of a Heretic

(Documents Pertaining to the Reconciliation to Our Holy Catholic Faith of Joshua Morton, Native of England

and Protestant Heretic Who Has Followed the Rites of the Anglican Church Mexico City, October 8, 1720 A.D.)

Reception of Converts and Profession of Faith (Official Form)

To read more about the glorious St. Augustine, whose feast is today (Aug 28), see: https://tinyurl.com/3jbkt8jd