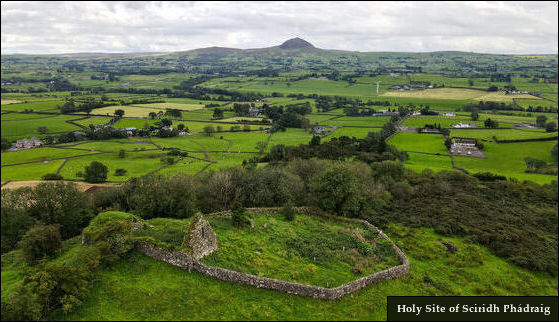 Sciridh Phádraig is a foot-hill mountain located on the further side of the Braid Valley from Slemish Mountain (seen in the distance). On its top, there is the remains of a church which St. Patrick founded - surrounded by a cemetary. In the churchyard, is a rock on which the angel Victor left his footprint.

"[St. Patrick...] saw an angel ascend to heaven in his sight, leaving his

footstep impressed on the rock of the other mountain (Sciridh Phádraig)."

(Extracted from Codex Ardmachanu, "The Book of Armagh" 807 A.D.)

"Of the Angel Victor appearing to Saint Patrick" 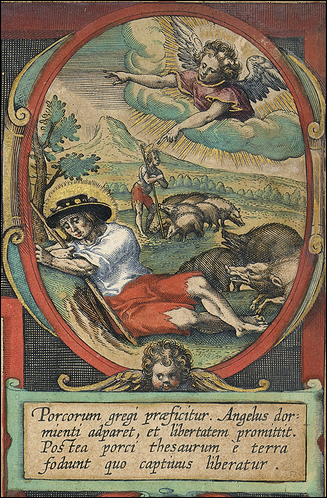 Part of an engraving of scenes from the life of Saint Patrick (An Angel Appears) by Adriaen Collaert, 1603 A.D.,

published to encourage Dublin Catholic citizens in their faith, during the brutal persecution by the English heretics

"And six years had now passed when, under the direction of the Lord, he had thoroughly learned the Irish tongue, and with prayers and with tears he unceasingly besought of God that he might be released from slavery and restored to his country. And on a certain day appeared unto him, while praying, an angel of the Lord, standing on the crag of an overhanging rock, and announcing that his prayers and his fastings had ascended as a memorial before God; and the angel added thereto that he should soon cast from his neck the yoke of servitude, and, after a prosperous voyage, return to his own parents. And the servant of God looked on the angel of God, and, conversing with him face to face familiarly, even as with a friend, asked who he was, and by what name was he called.

And the heavenly messenger answered that he was the ministering spirit of the Lord, sent into the world to minister unto them who have the heritage of salvation; that he was called Victor, and especially deputed to the care of him, and he promised to be his helpmate and his assistant in doing all things. 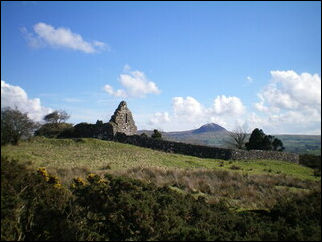 Image of Sciridh Phádraig (Ireland), where in 397 A.D., God sent His

angel Victor, to rescue St. Patrick from slavery and to be his special helper

(cont.) And although it is not needful that heavenly spirits should be called by human names, yet the angel, being beautifully clothed with an human form composed of the air, called himself Victor, for that he had received from Christ, the most victorious King, the power of vanquishing and binding the powers of the air and the princes of darkness; who had also given to his servants made of the potter's clay the power of treading on serpents and scorpions, and of vanquishing and bruising Satan. And in their mutual colloquy the angel showed unto Patrick an opening in the ground that had been delved up by the swine, and therein he directed him to look for gold with which he might redeem himself from the hands of his cruel master; and he added that a ship to carry him over to Britain was ready in a harbor two hundred miles distant, and which, by the divine will, could not have a favorable wind until he should arrive. And the vision of the angel, thus saying, disappeared, and his speech ended; and, as the inhabitants assert, the marks of his feet appear even to this day *imprinted on the rock in the Mountain Mis, in the borders of Dalnardia; and an oratory is erected there in honor of St. Patrick, wherein the devotion of the faithful is wont to watch and pray."

(Source: Extract from, "The Most Ancient Lives of Saint Patrick: Including the Life by Jocelin, Hitherto Unpublished in America, and His Extant Writings", Chapter XV, Edited by Fr. James O'Leary, D.D., 1880)

*The story of the miracle of the lasting imprint of the angel Victor's feet, was known to the author of "Fiacc's Hymn" more than a thousand years ago. He tells how the angel came to Patrick in his captivity: "Victor said to the slave that he should flee from Míliucc across the waves: he set his foot upon the flag (rock), its trace remains, it does not fade."

Ireland: The Land of Saints & Scholars

St. Columba (also known as St. Columbkille) of Iona's Prophecy on The 3 Days of Darkness

*The Final Part of St. Malachy's Papal Prophecy (List of Popes until the End of the World)

*Note: The imbecilic Novus Ordo Sect is "pulling its hair out", as they have incontrovertibly falsely (and blasphemously) calculated, that the latest antipope, Bergoglio (A.K.A."Francis"), is the last True Pope prophesied on St. Malachy's list. It serves *them right... . Our time will come. The exiled Papacy/Church will Triumph! -ED

*"To adhere to a false Bishop of Rome [a false "pope"] is to be outof communion with the Church." -Saint Cyprian, Doctor of the Church

"Thou art Peter; and upon this rock I will build my Church, andthe gates of hell shall not prevail against it." -Our Blessed Lord

Also, for your convenience we have posted this QR Code, that can be used to give, via mobile devices.