The following declassified U.S. Department of State document on "Pope" John XXIII was filed on 10-29-58. A mere three days after his plotted criminal usurpation of the papal throne, from the lawfully elected pope, Gregory XVII ("Cardinal" Siri).

"Where the See of the Blessed Peter and the Chair of Truth have been set up for the light of the gentiles, there they have placed the throne of the abomination of their wickedness, so that, the Pastor having been struck, they may also be able to scatter the flock." (Vision of Pope Leo XIII of the Papal Usurpation)

"The Rock has always withstood the test of time. But one will be entered into the House of God. Woe to man when he places him upon the See of Peter for then, the Great Day of the Lord is at hand." -St. Pius X

(Extract from the book, L'Eglise Eclipse)

People Must Change Their Thinking in Order to End the Crisis

St. Nicolas of Fluh on Triumph of Our Exiled Holy Father 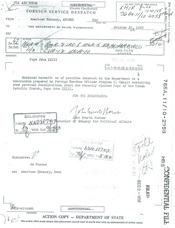 Very important document which outlines the modus operandi of an experienced operative who gave an appearance to the WORLD as benign & harmless.