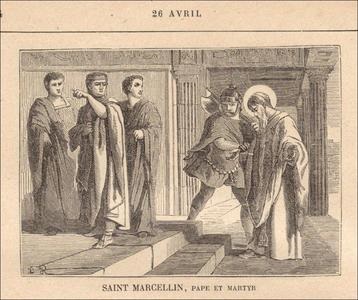 Some uncatechized and/or willfully ignorant people, have tried to say that Pope Gregory XVII (1958-1989), who was under grave duress for 30 years by the freemasons, "lost his papacy" for possibly offering the reprobate "New Order Mass".

Please see the Catholic historical precedent of another prisoner pope, who had his free-will impeded by Satanic persecutors, His Holiness, Pope St. Marcellinus, whose feast it is today:

The Roman Breviary reads on April 5th: "During the cruel persecution of the Emperor Diocletian. Marcellinus of Rome, overcome with terror, offered incense to the idols of the gods. For this sin he did penance and wearing a hair-shirt went to the Council of  Sinuesso, where many Bishops had assembled and there openly confessed his crime."Note: This act did not constitute the loss of the papacy, since it was done under grave *duress at the time. Pope St. Marcellinus is listed obviously on the official list of popes. -ED

*St. Thomas Aquinas teaches in order to constitute a genuine [true] act of the will: the act must be performed spontaneously [freely] -without constraint or force- (and that) man can be coerced or forced to do something against his will in two ways: by violence and by fear (VI. 4, 5,6). That which is done under exterior violence is wholly involuntary (VI. 5).

"Pope Marcellinus ruled the Church of Rome for nine years and four months. By order of Emperors Diocletian and Maximian he was taken prisoner and brought forward to offer sacrifice to the idols. At first he refused and was threatened with various kinds of torture, and for fear of the threatened suffering he put down two grains of incense in sacrifice to the gods. This gave great joy to the infidels but caused the faithful immense sadness.However, under a weak head, members rise up and make little of the threats of the princes, so the faithful came to the Pope and reproached him severely. He realized the gravity of his error and offered himself to be judged by a council of Bishops. The Bishops responded: “It is not possible for the Supreme Pontiff to be judged by anyone, but you yourself weigh your case in your own mind and pronounce your own judgment.” The Pope, repentant, lamented his fault and *deposed himself, but the whole gathering immediately re-elected him. When the Emperors heard of this, they had him arrested again. He absolutely refused to offer sacrifice to the idols, so they sentenced him to be beheaded. Then the persecution was renewed with such a fury that in one month 17,000 Christians were put to death.

*Note: Pope Marcellinus did not ipso facto lose his office as pope. He weighed his own specific case in his own mind, and then judged to depose himself (but was "immediately re-elected"). TCW learned in 2006, that Pope Gregory XVII ("Siri") in discussing with trusted clergy, in the Spring of 1988, concerning his own lethal "duress situation", concurred with them, that as he was not a free moral agent to act (due to his being a captive of the freemasons), it removed culpability for his seeming transgressions against the Faith (such as attending the apostate V2 Council, or presiding in public gatherings "staged" by the antipopes).

When Marcellinus was about to be beheaded, he declared himself unworthy of Christian burial and excommunicated all who might presume to bury him. Thus his body lay above ground for 35 days. At the end of that time the Apostle Peter appeared to Marcellus, who had succeeded as Pope and said: “Brother Marcellus, why do you not bury me?” Marcellus replied: “Have you not yet been buried, my Lord?” Peter: “ I consider myself unburied as long as Marcellinus is unburied!” “But don’t you know, my Lord,” Marcellus asked, “that he laid a curse on anyone who buried him?” Peter: “Is it not written that he who humbles himself shall be exalted? You should have kept this in mind! Now go and bury him at my feet.” Marcellus went straightaway and carried out the orders laudably." (From Blessed Jacobus of Voragine's sacred, "Legenda Aurea", c. 1260 A.D.)

"Violent hands will be laid on the Supreme Head of the Catholic Church. ... Yes, yes, the flock will become small." (End Times Prophecy of Bp. Wittman d. 1833)

Ecclesiastical ApprobationIn Today's Catholic World (TCWBLOG.com) carries the approbation in writing of the Holy See in exile. It faithfully adheres to the rules for Catholic Journals mandated by Leo XIII in the Apostolic Constitution Officiorum ac Munerum, January 25, 1897 - so heavily re-stressed by Pius X in Pascendi Dominici Gregis, September 8, 1907

St. Thomas Aquinas teaches in order to constitute a genuine [true] act of the will: the act must be performed spontaneously [freely] -without constraint or force- (and that) man can be coerced or forced to do something against his will (cont.)

The Bishops of St. Marcellinus in the council added, that Peter, too, sinned through the same weakness, & by the like tears, obtained pardon from God.