"It is better that scandals arise than the truth be suppressed."(Pope Saint Gregory The Great)

Note: a little more than 15 minutes ago, I, the Editor of TCW, just opened an email (sent earlier today) from the ipso facto condemned heretic, "Fr. Khoat Van Tran" (a former Catholic priest)... impotently trying to stop this True Catholic Journalist, from further exposing his attempt to cover up, his international mailing [trafficking] of the Most Blessed Sacrament (2nd Person of the Trinity) from Vietnam, 6,772 miles, to the IETG (International Eucharist Traffickers Group) in North America for Donation$ - a true criminal operation.

Multiple (deeply concerned) sources have contacted TCW about this profane racket of the reprobate Fr. Tran [well-known to do basically anything for money], and provided TCW with bullet-proof evidence, which includes emails of Tran himself soliciting more individuals to get involved in his damning dealings. This must be, and will be stopped! Be prepared for more falsehood/disinformation against TCW and the PRC. St. Michael, Protect us from the wickedness and snares of the devil! 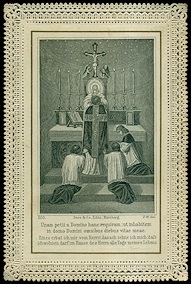 "No one is as far from the Pasch of the Lord as heretics. They can have no part with Him who are enemies of this saving Mystery. For they deny the Gospel and contradict the Creed, and they cannot celebrate the Paschal Feast with us. And though they dare to claim the name of "Christian," nevertheless every creature whose Head is Christ scorns them."

TCW can also report the IETG members are clearly in panic mode too. In fact TCW has verified that the top people in the IETG have formed a "mutual-defense type cabal" with Tran and are currently funding the Faithless Vietnamese Destroyer "FVD" (sounds like a disease) - enabling him to publish more visceral Anti-Catholic... Atheistic Communist propaganda. (Much more to be reported... be sure to check back).

The Most Blessed Sacrament - The Omnipotent God on Earth

"Then the (Red) soldiers told the remaining boy and his sister to 'clear out,' but the boy's only answer was to bar the way to the altar steps with his body.'"

It was in the summer of 1921. There was a little village near Petrograd, along the Petrograd-Viborg Railway. This village once had a Lithuanian asylum for orphans; hence there was a Catholic church in that place. Soon after the Revolution the asylum was closed, as there were no funds to keep it going, and the priest in charge of the little church had to leave yet a few Catholic families remained on in the village.During the next four years the place underwent many a vicissitude, coming alternately into the hands of the Whites and the Reds. After all hostilities were over, the Reds settled there, and the village resumed more or less of its former tranquillity, but its inhabitants missed their little church.The village was naturally brought to rack and ruin during those four disastrous years. Scarcely any houses were fit to live in, whilst the Reds had to keep a considerable garrison there in view of the situation of the village being close to the Finnish frontier. But there was no living accommodation and at last the authorities resolved to turn both the asylum and its church into barracks. As these buildings were barred and locked, it was decided that the doors should be forced open.On the eve of the day appointed for the carrying out of this plan, a few Red soldiers sat in the village public house, discussing the details of its execution. They were overheard by some children, three boys who happened to belong to the few Catholic families of the place. The boys were all of them big enough to remember how their mothers used to take them into the little church and teach them to genuflect before the altar, saying that "Jesus lived there." The children grasped the idea that Jesus house was to be insulted as they knew well what the Red soldiers were like. The boys did not know that with the closing of the church the Blessed Sacrament had been removed. Their minds clung to the old associations, and they resolved to do all they could to shield Jesus.The children found out that the raid would take place in the small hours of the following morning. Accordingly, they began to watch from midnight on. They crept into the old church through a window which for some unknown reason was left half open, and overlooked the yard of one of the houses. A sister of one of the boys joined them, as she was as eager as her brother and his friends to "shield the dear, loving Jesus."The children kept their brave watch all through the hours of the night, crouched at the altar steps, and early in the morning the door was broken open and the Reds came in. When they saw the children, at first they gruffly told them to be off, as this was no place for them. The children remained where they were, and the Reds threatened to fire on them. The boys replied they would not suffer their dear Jesus to be insulted, and that they would remain there. The soldiers, most of them more than half tipsy, began to shoot at the children, and two of them immediately fell. Then the soldiers told the remaining boy and his sister to "clear out," but the boy's only answer was to bar the way to the altar steps with his body.

A few minutes later he was carried out of the church, bleeding but smiling. "We have shielded Jesus, they did not dare to touch him'" he told his mother when they brought him home.

The little boy died a few hours afterwards, but he lived long enough to say that he had seen Jesus standing smiling and radiant, on the altar steps, and stretching his hands in benediction on the fallen bodies of the children who laid down their little lives to shield his Tabernacle. And the soldiers saw him, too, but they were terrified; to them he did not appear smiling, so they fled screaming that the place was haunted by the devil. And the boy died radiant, saying: "We have shielded Jesus." 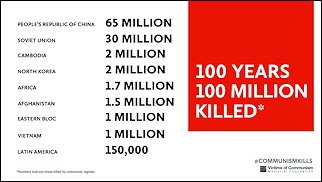 The Bolshevik plague that began in Russia was the greatest catastrophe in human history.

Armed Bolsheviks seized the Winter Palace in Petrograd—now St. Petersburg—100 years ago this week and arrested ministers of Russia’s provisional government. They set in motion a chain of events that would kill millions and inflict a near-fatal wound on Western civilization.

The revolutionaries’ capture of train stations, post offices and telegraphs took place as the city slept and resembled a changing of the guard. But when residents of the Russian capital awoke, they found they were living in a different universe.

Although the Bolsheviks called for the abolition of private property, their real goal was spiritual: to translate Marxist- Leninist ideology into reality. For the first time, a state was created that was based explicitly on atheism and claimed infallibility. This was totally incompatible with Western civilization, which presumes the existence of [God] over and above society and the state.

The Bolshevik coup had two consequences. In countries where communism came to hold sway, it hollowed out society’s moral core, degrading the individual and turning him into a cog in the machinery of the state. Communists committed murder on such a scale as to all but eliminate the value of life and to destroy the individual conscience in survivors.

But the Bolsheviks’ influence was not limited to these countries. In the West, communism inverted society’s understanding of the source of its values, creating political confusion that persists to this day.

first published in the November 6th, 2017 Edition of The Wall Street Journal.)

Prayer to The Holy Face:("in reparation for the crimes of COMMUNISTS, blasphemers... .")

"The Blessed Eucharist, Our Greatest Treasure"

Ecclesiastical ApprobationIn Today's Catholic World (TCWBLOG.com) carries the approbation in writing of the Holy See in exile. It faithfully adheres to the rules for Catholic Journals mandated by Leo XIII in the Apostolic Constitution Officiorum ac Munerum, January 25, 1897 - so heavily re-stressed by Pius X in Pascendi Dominici Gregis, September 8, 1907.

Note: an important quote from Pope St. Leo The Great was added to this post.

..The faithless Tran, with the help of his corrupt backers, is doing All In His Power to publish a 2nd & 3rd part of his filthy Communist "Trilogy". Please recite this prayer, in reparation & to defeat Jewish Communism: tinyurl.com/crush-commies

Fr. Tran and these evil people assisting him commit simony, have undoubtedly incurred the "Indignationem omnipotentis Dei, et beatorum Petri et Pauli apostolorum!" (Wrath of Almighty God and of the Blessed Apostles Peter and Paul!) Their time is short.

TCW has learned that the proud heretic Tran (who continues to sell his soul killing book online) sent out close to 100 Consecrated Hosts [Second Person of the Trinity] this year in the mail & hoped/hopes to send more to receive $ ("donations").

"Most Holy Trinity, Father, Son and Holy Ghost, I offer You the most precious Body, Blood, Soul and Divinity of Jesus Christ, present in all the tabernacles of

the world, in reparation for the sacrileges, outrages and indifference by which he himself is offended. And through the infinite merits of His Most Sacred Heart

and the Immaculate Heart of Mary, I beg of You the conversion of poor sinners.”(Prayed by the Archangel at Fatima prostrating on earth with the 3 children)

WOE to unfaithful priests and bishops, they will give the last sword thrust to the Church through scandal. Prophecy of Marie-Julie Jahenny, approved mystic since 1875.

We soldiers need to start making reparation. I know the reparation to the Holy Name & Sundays, viz. Golden Dagger. Is there a reparation for Blessed Sacrament?

An incredible story of love and heroism titled: "The Unknown Catholic (Eucharistic) Martyrs of Russia" was added to this post.

St.Michael protect us from this ingrate and reprobate commie.