Pope at the 1958 Conclave and NEVER Abdicated 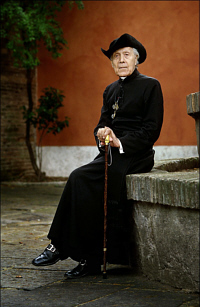 Jean-Marie Charles-Roux was born in Marseille into a French diplomatic family on December 12 1914.

His first memories were of Rome, where his father was a member of the French embassy to the King of Italy.

Fr. Jean-Marie Charles-Roux, a former Vatican official and intelligence officer claimed that Cardinal Siri of Genoa had been elected and also *accepted the Papal office, but was then immediately shoved aside, **without his actually abdicating. According to Fr. Charles-Roux, a very serious threat was delivered to Siri and the assembled Cardinals through Cardinal Tisserant, the Dean of the Sacred College of Cardinals, shortly after the acceptance of office by the new Pope. Conclave ministers had already begun to burn the ballots with dry straw in the Sistine Chapel stove, sending up white smoke to announce the election of the Pope. Even as the thunderous cheers of the crowd outside could be heard by those inside the conclave, a group of cardinals in league with Tisserant commanded the ministers to change the mixture in the stove to wet straw in order to produce black smoke. When the conclave officials refused the order to send out a false signal that would indicate no electoral results, a group of Cardinals brushed the monsignors aside and began to dump wet straw into the stove. Thereafter, a “shoving match” ensued over control of the stove, and the alternating mixtures of dry and wet straw that were being put into it, caused the smoke to vary from white, to black, to white again, and finally to gray, he said.

*"The person thus elected [pope] acquires full jurisdiction over the universal Church immediately on consenting, and becomes the Vicar of Christ on earth." ("Canonical Elections" p. 107, 1917, Imp.)**In various clandestine meetings in the late 1980s with trusted clergyman, the Hostage Pope, Gregory XVII, affirmed the unlawful real threats that were thrust upon him at the Conclave on October 26, 1958.Yet Christ's perfect Church has a "built in safeguard" [Law] in place, to protect Her against these type of illegal aggressors - which providently even provides remedy against the possible human frailness of one of Her threatened Lawful Office Holders. Thus, in the state of grave fear that was unjustly inflicted upon Pope Gregory XVII (which lasted his entire pontificacy), he could NOT (by law) resign His Office as Pope - even if he desired to - as the Church's Canon Law decrees:

"Resignation is invalid by law if it was made out of grave fear unjustly inflicted, fraud, substantial error, or simony."

Coming to the Rescue of The Pope in Exile (Our Duty!)