"The people will be dying of hunger when he is created (*Cardinal?) who will divide and give to the poor. (Flower of flowers.)"

*Note: Fr. Culleton inserts his commentary in parentheses, "Cardinal?" [i.e., the word Cardinal with a question mark after it] in this famous 15th century prophecy of St. John Capistran of the last popes in time. The quotation is found in his popular book on Catholic prophecy: "The Prophets and Our Times," by Fr. Gerald Culleton, p. 157, 1941 Imprimatur.

Providence brought forth a rare flower in the

barrenest of deserts the Church has endured ... 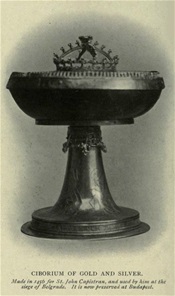 Ciborium of gold and silver made in 1456

for St. John Capistran, and used by him.

TCW's analysis of St. John Capistran's Flos Florum Prophecy: The people were "dying of hunger" [no supernatural grace from schismatic "sacraments" - and from the poison of heresy, for decades] when in the Spring of 1988, the "Hostage Pope", Gregory XVII, CREATED true (1.) cardinals - giving them the command to (2.) elect a successor promptly, if he were to die in an unforeseen manner. His Cardinals in obedience, after overcoming many obstacles, successfully convened the (secret) papal conclave in Rome on May 2nd, 1991 and elected Pope Gregory XVIII on May 3rd, 1991.

(2.) "The right to elect the Roman Pontiff belongs solely and personally to the Cardinals of the Holy Roman Church, while absolutely excluding and rejecting every intervention from no matter what ecclesiastical authority or from every secular power, of whatever degree or condition it may be". -Pope Pius XII, Apostolic Constitution "Vacantis Apostolicae Sedis".

St. John Capistran goes on to say in the prophecy that this pope, "will divide and give to the poor".

This seems to imply that it is to the little ones with true childlike simplicity of heart now (and after the 3 Days of Darkness), who are to reap unprecedented treasures of heavenly grace, as reward for their unwavering confidence in Christ's Divine promises to His Church and its Vicar.

On St. Malachy's famous prophetic list of popes. Pope Gregory XVII is Pastor et nauta "Shepherd and sailor" - and the next chronological entry on St. Malachy's list is Flos florum "Flower of flowers".

*St. John Capestran (d. 1456) ends his prophecy with the name of the pope (Flower of flowers).

*The Sanctity of St. John Capestran: "Nicholas of Fara, after mentioning several great preachers who evangelized Italy at this time (15th c.), says: "But of all these no one was more esteemed by his brethren than John Capistran; no one more in favour at the Roman court; no one more learned in civil and canon law; no one more zealous for the conversion of heretics, schismatics, and Jews; no one more solicitous for the advancement of religion; no one more powerful in working miracles... .  These people...  received him (St. John Capistran) with such honour and were so eager to listen to him, that those who came to hear the word of God often filled the largest squares and broadest fields. Often there were twenty thousand, thirty thousand, sometimes over a hundred thousand persons present at his sermons." (From the book,"Saint John Capistran", by Fr. Vincent Fitzgerald, O.F.M., pp. 24-25, 1911, Longmans, Green and Co., New York. Imprimatur)

*Foundations of our Faith Based on the Successor of Peter

*Msg. Sarto (the future Pope Pius X) on the paramountcy of the pope

How do I make a donation to this worthy cause?