On January 25, 1569 the Catholic Monarch Philip II of Spain established the Spanish Inquisition in the New World, where Spain had set up two viceroyalties: New Spain, comprising what is now the Southwestern U.S., Mexico, Central America, and much of the Caribbean; and New Castile, with Peru as its center, comprising almost all of South America.

TCW has been studying in great detail the Sacred Inquisition for some time, and is most anxious for it to return visibly in its fullest vigor world-wide: to protect God's rights and the souls of the faithful from, *"the proud gates of those who belong to the nether world, that is against heresies and the builders of heresy, as St. Epiphianius says". Posted below for our readers is King Philip II's official decree establishing the Spanish Inquisition in the New World. 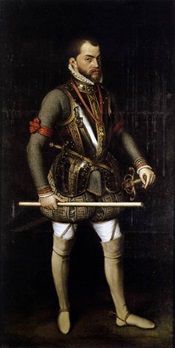 "Our glorious ancestors, faithful and Catholic children of the Holy Roman Catholic Church, considering what touches upon our royal dignity and Catholic zeal, strove through all measures possible that our Holy Faith be expanded and exalted throughout all the world, founded in these our kingdoms the Holy Office of the Inquisition so that the Faith be conserved in all the purity and completeness necessary. And having discovered and incorporated in our Royal Crown, by providence and the grace of God our Lord, the kingdoms and provinces of the Western Indies, Islands, and Tierra Firme 20 of the Ocean Sea, and other parts, they put their great care in giving them the knowledge of the true God, and to strive to enlarge his Holy Evangelical law, and to conserve, free from errors and false and suspicious doctrines, and in their discoverers, settlers, children, and descendants of our vassals, the devotion, good name, reputation, fame, and the strength of care and fatigue they strove to enlarge and exalt.

And because those who are outside the obedience and devotion of the Holy Roman Catholic Church, obstinate in errors and heresies, always strive to pervert and to separate from our Holy Catholic Faith, the faithful and devoted Christians, and with their malice and passion work with all effort to attract them to their wicked beliefs, communicating their false opinions and heresies, popularizing and spreading diverse condemned and heretical books; and the true remedy consists in turning aside and excluding all communication by the heretics and suspicious persons, castigating and extirpating their errors, shunning and obstructing what causes great offense to the holy faith and Catholic religion in those parts; and the natives there are perverted with the new, false, and reprobate doctrines and errors: the apostolic inquisitor general in our kingdoms and realms with the agreement of those of our Council of the General Inquisition and, consulting with us, ordered and decided that the Holy Office of the Inquisition will be established and seated in those provinces, and for the discharge of our royal conscience, and for the deputizing and naming of apostolic inquisitors against heretical depravity and apostasy, and the necessary officials andministers for the use and exercise of the Holy Office. And because it is proper, we order them to be given the favor of our royal arm [of justice]. And as a Catholic prince zealous of the honor of God, and benefit of the Christian republic, we wish the Holy Office to operate freely: We command our Viceroys, Presidents, Judges, and alcaldes, 21 and all other governors, corregidores, 22 and alcaldes mayores, 23 and all other justices of all cities, towns, and places in the Indies, both Spaniards as well as the native Indians, that from the present time onward from this time forth, that each and every time that the apostolic inquisitors operate in whichever part of the said provinces exercising the Holy Office of the Inquisition, that its ministers, officials, and persons be received with due and decent reverence and respect, having consideration of the Holy Ministry that they will practice, and they should be housed and left to freely exercise their Holy Office, and being ordered by the Inquisitors, all should take the canonical oath, which is usually done, and all should give aid to the Holy Office whenever it is requested, and they should be given all aid of our secular arm of government in order to arrest whatever heretics or suspects in the faith they may find, and aid in whatever may touch upon or concern the free exercise of the Holy Office, which has been decreed by Canonical law, style, and custom and is based on the instructions that have been previously given." (End)

the whole cycle of doctrine, and yet by one word, as with a drop of poison, infect

the real and simple faith taught by our Lord and handed down by Apostolic tradition."

"It is necessary for salvation that all the faithful of Christ be subject to the Roman Pontiff." (V Lateran Council)

Why the Jews Hate the Holy Office of the Inquisition

A Prayer to be Recited During The 3 Days Chastisement

In Today's Catholic World (TCWBLOG.com) carries the approbation in writing of the Holy See in exile.
It faithfully adheres to the rules for Catholic Journals mandated by Leo XIII in the Apostolic Constitution Officiorum ac Munerum, January 25, 1897 - so heavily re-stressed by Pius X in Pascendi Dominici Gregis, September 8, 1907.

May the Holy Mother's will be done, because Her will is His will. PRAY the Rosary. Peace.