When Usurpers of Vatican Discovered True Pope Spoke Out

"In the week that followed the publication of this article ("The Pope: Could He Be Cardinal Siri?", July 1986), Monsieur de Franquerie received two phone calls from Rome, proving that even a small highly confidential review was read at the Vatican. Correspondents wanted to know if the article was serious [an objective/factual news account], that, Monsieur Franquerie of them confirmed.

The Editor of TCW, and all True Catholics, owe an incredible amount of thanks to the *Marquis de la Franquerie, and his distinguished colleagues, for their truly ground breaking interview with "Cardinal Siri" (Pope Gregory XVII) on May 18th, 1985. That providential meeting paved the way for today's True Papal Restoration Campaign - whose sole goal is to visibly restore Pope Gregory XVII's worthy successor, Pope Gregory XVIII, to his lawful Throne.

*Marquis de la Franquerie was a French Royalist. In 1926 he was appointed editor-in-Chief of the Church Approved magazine, the International Review of Secret Societies. He was made a chamberlain by His Holiness, Pope Pius XII, and was a noted expert at exposing Freemasonry. Hence, he was both greatly respected, and also feared, by certain prelates in his time. It was this background/clout that enabled him to gain access to the hostage pope, in Genoa, that fateful day in May.

Provided below is the account of that historic May 18th, 1985 meeting, recorded by one of the eyewitnesses present, Monsieur Luis-Hubert Remy. It is important to note that Pope Gregory XVII, in clandestine meetings with traditional Catholic clergy in June 1988, would further reveal that he was elected pope, accepted the office, and chose the name Gregorius XVII at the October 26, 1958 Conclave. And related that his masonic captors could kill him at any time. (Less than eleven months after these secretive June 1988 meetings, Gregory XVII was dead). 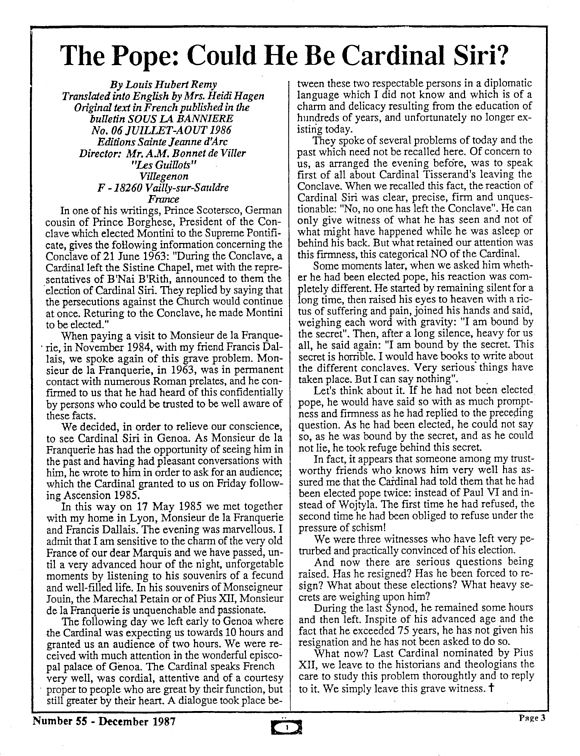 Was Cardinal Siri first elected Pope at the 1958 conclave?

Yes, and chose the name Gregory XVII. He had no need whatsoever to be "elected" at any future conclave(s), nor could be. His sorrowful reign "in eclipse" lasted from October 26th, 1958 until May 2, 1989.

PLEASE TO KEEP ME INFORMED. THANKS!

Hi Mary, due to the generousity of the True faithful, we are very close to the goal of being able to provide for a priest to stay on the East Coast of the US for 3 to 6 months, who will offer True Sacraments to the Underground Church.

Only true Catholics searching for the answers will be blessed to find the information like this at this time, in God's plan. Persevere to the end. GB all.