"The darknesses cannot win over the light" -Gregory XVII

"We are now in a time of trying: and in trying times it's easier to see the darkness than that of the light. However the light is present: the same power of the darkness is a means of purification because we are more capable of seeing the light. The darknesses cannot win over the light. We know that our Lord leads things in goodness: and uses the sufferings and the same sins of man because a greater goodness results. When one hundred years ago the temporal power fell, the Pope seemed like a prisoner. "The end of the Papacy," screamed the modest means of social communications of that time. Instead, a great season of the papacy was about to be communicated. And the same loss of power contributed to it. Not that we must salute the politicians of that time as liberaters of the Church: it is that God uses some of the works of everybody for the good of its people, and that of all humanity. It will also be like this tomorrow (in the future): in our difficulties, one will only consider the light. Our human weakness, isolation, sense of defeat will appear changed by the power of God, as a sign of glory in his city. It is in the light of the cross of the Lord that the night becomes lighted. I am not a pessimist, I only reveal that the time has been made dark because the shadow of the cult of material things extends throughout the world. I have always noticed that in general the theological errors derive from marxist pollution... ." 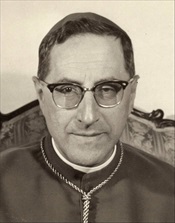 Note: below, the hostage pope Gregory XVII ("Siri"), carefully reflects on the situation of the Papacy being usurped by Jewish Commie/Masonry. And provides words of hope to members of the "Church in Eclipse". -ED

The Whole Church Has Never Doubted Election Of Gregory XVII

Ecclesiastical ApprobationIn Today's Catholic World (TCWBLOG.com) carries the approbation in writing of the Holy See in exile. It faithfully adheres to the rules for Catholic Journals mandated by Leo XIII in the Apostolic Constitution Officiorum ac Munerum, January 25, 1897 - so heavily re-stressed by Pius X in Pascendi Dominici Gregis, September 8, 1907

We follow the first Christians before us who only heard about St. Peter but never saw him yet continue to walk by God's grace on the narrow path to eternal life