CLICK HERE TO VIEW IT (Scroll down after clicking, to see video.) 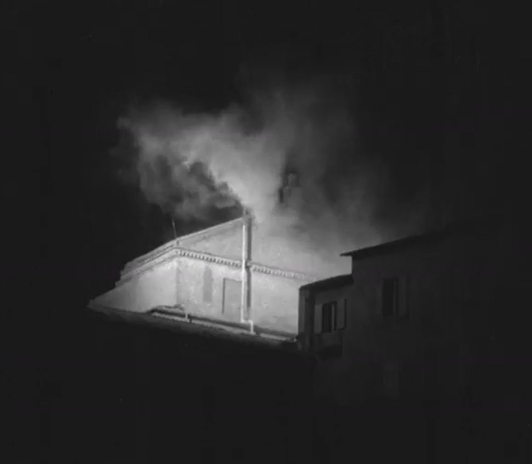 White smoke seen billowing forth from the chimney of the Sistine Chapel on Oct 26, 1958 at 6 p.m., witnessed by more than 200,000 joyous Catholic Faithful inSt. Peter's Square, indicating that a Pope had been elected from within the conclave.

Notes: Shows one of the most important events in History - the Papal Conclave on October 26, 1958 at 6:00 p.m., when at the end of this video [1 min. 6 sec. point] white smoke bellows forth from the Sistine Chapel, indicating Cardinal Giuseppe Siri of Genoa, Italy is elected Pope. He *accepted the office and chose the name Gregory XVII. Then, a freemasonic coup d'état occurred within the conclave itself - violently "blocking" the newly elected pope.

Additional Notes: According to a knowledgeable Italian priest, Monsignor Carlo Taramasso, who had conferred with Cardinal Siri [Gregory XVII] in 1988, a conservative bloc of Cardinals was successful in electing Siri on the fourth ballot of the first day of the conclave, on October 26, 1958. He ("Siri") was then intimidated into keeping silent (through various means) about His status as were His (legitimate) cardinals for 31 years. Yet, by a near miraculous occurrence shortly before His "unforeseen" death on May 2, 1989, His Holiness, Gregory XVII, did perform the proper actions to carry on the True Hierarchy (Petrine Mission) of the True Church.

The ominous reality of Our Lady of La Salette's words that: "Rome will lose the faith and become the seat of the Antichrist... the Church will be in eclipse," is now sadly right before our very eyes. Still, "the gates of hell shall not prevail against it" [the One Holy Catholic and Apostolic Church, founded by the Precious Blood of Christ].

Blessed Be St. Peter, Prince of the Apostles!

People Must Change Their Thinking in Order to End this Crisis

For 5 full minutes the white smoke billowed forth from the chimney of the Sistine Chapel on Oct 28, 1958 at 6 p.m. Millions of others listening via radio throughout Europe heard the Official Vatican Radio broadcaster shout exultantly: "A pope is elected!"