The highly respected cleric, Taramasso, was made a bishop and cardinal by Gregory XVII "Siri"

at a clandestine meeting held at the Istituto Ravasco convent in Rome, in June of 1988 A.D.

“To conserve the Unity of the Church, the power of the keys mustbe passed on through Peter to the other pastors of the Church.”

(1.) Mon. Carlo Taramasso, of Santa Marinella who was literally responsible/entrusted with the keys to

the Sistine Chapel, had great connections in Rome. He was able to summons his fellow Italian, the illustrious Archbishop Arrigo Pintonello, to come to a clandestine meeting(s) held by the Hostage Pope, Gregory XVII, at the Istituto Ravasco convent at Via Pio VIII, 28, in Rome, in June of 1988. Abp. Pintonello obviously regarded Mon. Taramasso as a man of high integrity/trust to have so promptly hastened to the meeting at the Ravasco convent, after receiving his call.

(2.) A sister of Mon. Taramasso confirmed to a TCW correspondent in 2015, in Italy, that her brother was in some sort of communication and had met on different occasions, with "Siri", before her brother mysteriously died (on March 16, 1989). 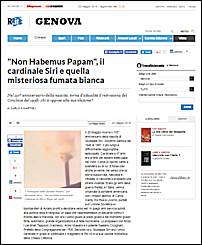 On May 20th, 2016 Italy's largest MSM (Mainstream media) newspaper, "la Repubblica", wrote a supportive article on the Siri Thesis - which even cited the Holy Father's pontifical name, Gregorio XVII, in it. You can read the full article, "Non Habemus Papam", il cardinale Siri e quella misteriosa fumata bianca ("Do Not We Have A Pope: Cardinal Siri and that mysterious white smoke") at the following link: http://genova.repubblica.it/cronaca/2016/05/20/news/non_habemus_papam-140174312/ -ED

(3.) Pope Gregory XVII *related (in Italian) to his confidant Mon. Taramasso in detail, what transpired on

October 26, 1958 within the Conclave when he was **elected pope, and how a powerful group of enraged Freemasons ["Cardinals"] immediately tried to illegally block his lawful election as Christ's Vicar.

*"According to a knowledgeable Italian priest [Mon. Carlo Taramasso -ED of TCW] who had conferred with Cardinal Siri, this conservative bloc was actually successful in electing Siri on the fourth ballot of the first day of the conclave, October 26, 1958... Siri...is said to have promptly accepted the office and announced that he would take the name "Gregory XVII." Then, a shrill storm of protest was heard from the reformers, who jumped to their feet to intimidate the new Pope with the threat... ".

"I have seen one of my successors, of the same name,

"I see the Russians at Genoa."

In 1909, during an audience for the general chapter of the Franciscan Order, Pope Pius X suddenly

fell into a trance. The audience waited in reverent silence. When he awoke, the Pope cried out:

"What I see is terrifying! Will it be myself? Will it be my successor? What is certain is that the Pope will quit Rome, and in leaving the Vatican he will have to walk over the dead bodies of his priests."

"I have seen one of my successors, of the same name [Giuseppe], who was fleeing over the bodies of his brethren. He will take refuge in some hiding place; but after a brief respite he will die a cruel death."

"I see the *Russians at Genoa."

*"... Russians at Genoa." Reference to the Commie/masonic captors of Pope Gregory XVII - who guarded the hostage pope's every move in Genoa (Italy) - where His Holiness was exiled. 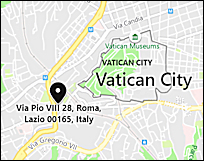 The Istituto Ravasco convent on Via Pio VIII, 28,

is located just outside [southwest] of Vatican City.

(4.) Mon. Taramasso was made a Bishop and Cardinal at the Istituto Ravasco convent in June 1988 by Pope Gregory XVII. At least three Cardinals were created by Gregory XVII during those dangerous & historic meetings - where the Hostage Pope gave his hierarchy specific instructions/strategy on how to carry on the mission of the One True Church, during these end times. Mon. Taramasso's personal secretary was also in attendance at the Ravasco meetings.

(5.) An Italian personal secretary of Mon. Taramasso confirmed in 2015 to TCW that "Cardinal" Agostino Casaroli [a notoroius Freemason] indeed had "oddly" sought out to meet with (the newly made Bishop & Cardinal) Taramasso [and did].

Note: there has been speculation for decades, that Taramasso, age 59, may have been poisoned by the high-ranking Freemason Casaroli [with digitalis]. Taramasso mysteriously died of a heart attack "di punto in bianco" ["out of the blue"], another of his *sisters (a physician) had detailed and documented in a hand-written letter (that TCW has in its possession) from the time-period shortly after her beloved brother's death. The sudden death of Cardinal Taramasso was a terrible shock and lamentation for Pope Gregory XVII and his small group of Cardinals, who were in the process of planning a strategic military type rescue of the Holy Father, from his Judeo-Masonic captors.

*This sister of Cardinal Taramasso, a doctor, after a careful review of the circumstances/medical information concerning her brother's death, concluded her brother did not die of natural causes.

"That Siri... was elected pope is an undeniable fact for those who know what

*Excerpt from Fr. Malachi Martin interview on 09/17/1996 in New York, NY - as published by "L’Eglise Eclipsée, by Les Amis de Christ-Roi", Editions Delacroix, 1997 Paris. Note: Fr. Martin (d. 1999) was a very controversial figure, who had access to secrets of the Vatican - and was in there, or connected to it, when the freemasonic takeover burst forth publicly on October 28th, 1958, and onward. -ED

AN ACT OF HOPE

O my God! relying on Thy almighty power and infinite goodness and promises, I hope to obtain pardon of my sins, the help of Thy grace, and life everlasting,  through the merits of Jesus Christ, my Lord and Redeemer.

The substance of this act is: I hope for Heaven and the means to obtain it.

Canons of the Sacraments of Orders (DZ 966, Can. 6): “If anyone says that in theCatholic Church a hierarchy has NOT been instituted by divine ordinance, whichconsists of the bishops, priests, and ministers: let him be anathema [cf. n. DZ 960].”

Hostage Pope he would be Consecrating Bishops (October 7, 1820)

“As I was going through Rome with St. Francis and the other saint, we saw a great palace engulfed in flames from top to bottom. I was very much afraid that the occupants would be burned to death because no one came forward to put out the fire. As we came nearer, however, the fire abated and we saw the blackened building. We went through a number of magnificent rooms (untouched by the fire), and we finally reached the Pope. He was sitting in the dark and slept in a large arm-chair. He was very ill and weak; he could no longer walk. The ecclesiastics in the inner circle looked insincere and lacking in zeal; I did not like them. I told the Pope of the bishops who are to be appointed soon. I told him also that he must not leave Rome. If he did so, it would be chaos. He thought that the evil was inevitable and that he should leave in order to save many things beside himself. He was very much inclined to leave Rome, and he was insistently urged to do so. The Pope is still attached to the things of this earth in many ways…”

“The Church is completely isolated and as if completely deserted. It seems that everyone is running away. Everywhere I see great misery, hatred, treason, rancor, confusion and utter blindness. O city! O city! What is threatening thee? The storm is coming, do be watchful!…”

*Anne Catherine Emmerich was born on September 8, 1774, at Flamske, Germany, and became a nun of the Augustinian Order on November 13, 1803. She died on February 9, 1824. Although of a simple education, she had a perfect consciousness of her earliest days and could understand the liturgical Latin from her first time at Mass... She was told in a mystic vision that her gift of seeing the past, present, and future was greater than that possesed by anyone else in history. From the year 1812 until her death she bore the stigmata (five wounds) of Our Lord, including a cross over her heart and wounds from the crown of thorns.

"Every Man for Himself Sacraments Regardless of the Law"

The Necessity of a Canonical Mission (809 Denzinger 434)

“It follows then that the Church of Christ not only exists to-day and always, but is

also exactly the same as it was in the time of the Apostles, unless we were to say,

which God forbid, either that Christ our Lord could not effect His purpose, or that

He erred when He asserted that the gates of hell should never prevail against it.”

Thanks Patricia for your well-known piece "Simple Truths About Salvation", that our Church Approved site has been privileged to re-post online for more than a decade, linked here: [ https://tinyurl.com/simple-truths ].