The following excerpt is from: "What Catholic Faith Is", by

St. Basil says: "Faith, always powerful and victorious, exercises a greater ascendancy over minds than all the proofs which reason and human science can furnish, because faith obviates all difficulties, not by the light of manifest evidence, but by the weight of the infallible authority of God, which renders them incapable of admitting any doubt." ...

This is the reason why the Church allows none of her children to call into question her divine mission. The light of faith which shines upon the mind of a Catholic so utterly consumes doubt, that, hereafter he cannot entertain it except by his own great fault.

"Faith," says St. Alphonsus, "is a virtue, or a gift, which God infuses into our souls in baptism, by which gift we believe the truths which God himself has revealed to the Holy Church, and which she proposes to our belief.

Pope St. Caius stayed *hidden in the Catacombs for 8 years to preserve himself for His flock.

The Saint was eventually captured and martyred (via decapitation). St. Caius' tomb,with the original epitaph, was discovered in the catacomb of Callixtus in Rome.

*"St. Caius encouraged St. Sebastian, and the other martyrs and confessors. However, to preserve himself for his flock, he withdrew for a time, to avoid the fury of the storm."  (Source: "The Lives of the Primitive Fathers, Martyrs, and other Principal Saints", by Rev. Alban Butler, Vol. IV pp. 232-233, Edinburgh, 1799 A.D., Imprimatur) Note: also see the ancient (original) Liber Pontificalis historical account of the life of Pope & Martyr St. Caius, attributed to the Church Father & Doctor, St. Jerome. -ED

"By the Church is meant the Congregation of all who are baptized and profess the true faith under a *visible Head, that is, the Sovereign Pontiff.

*"visible Head" does not mean a pope is forbade from fleeing persecution via concealment - as Pope Caius chose for the majority of his reign (see above) - or as Pope Pius IX did during the 1848 masonic persecution in Rome, by fleeing the Roman Papal Palace clandestinely... making himself "invisible" by wearing a disguise, during his dangerous journey into exile, in Gaetia, Italy. See: tinyurl.com/Pexile -ED

"I say, the true faith, to exclude heretics who, though baptized, are separated from the Church.

"I say, under a visible head, to exclude schismatics, who do not obey the Pope, and on that account easily pass from schism to heresy. St. Cyprian well says: 'Heresies and schisms have no other origin than this—the refusal to obey the Priest of God, and the notion that there can be more than one priest at a time presiding over the Church, and more than one judge at a time filling the office of Vicar of Christ.'

"the Church shall be... as it was in the beginning, invisible, hidden in catacombs" 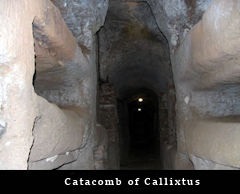 (In the Last Days...): "Then, the *Church shall be scattered, driven into the wilderness, and shall be for a time, as it was in the beginning, invisible, hidden in catacombs, in dens, in mountains, in lurking-places; for a time it shall be swept, as it were, from the face of the earth. Such is the universal testimony of the Fathers of the early centuries."

(Where Peter is, there is the Church.)

(Note: There have been at least 38 antipopes in the history of the Church. This works out to

be about two per century. -ED)

Pope & His Cardinals Exiled to Place Where They will be Unknown

How Grace is Supplied for Catholics Without Mass Options (Aquinas)

Type of Persecution Against the Church in the Last Days

Blessed be St. Peter. Prince of the Apostles!

(In the Last Days...): "Then, the Church shall be scattered, driven into the wilderness, and shall be for a time, as it was in the beginning, invisible, hidden in catacombs... ." -Cardinal Manning, Archbishop of Westminster, 1861 A.D.

"St. Caius encouraged St. Sebastian, and the other martyrs and confessors. However, to preserve himself for his flock, he withdrew for a time (to the catacombs for 8 years), to avoid the fury of the storm." -Rev. Fr. Alban Butler

Pope St. Caius stayed hidden in the Catacombs (and ran the Church) for 8 years. It certainly seems possible the Saint would have continued "hidden" for a decade, or even longer if he had not been captured. Was he betrayed... like his Master was?