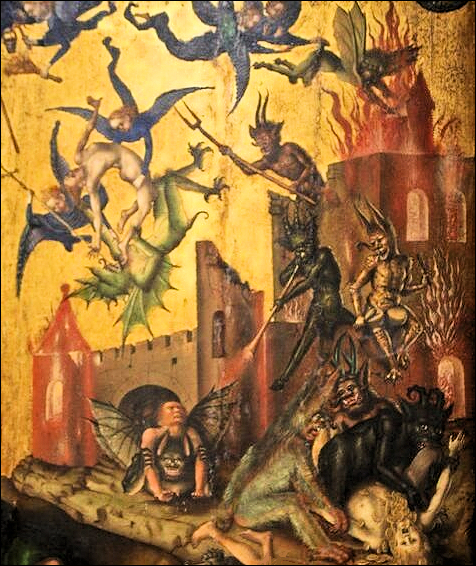 (Background: The Church entered into The Apostasy, at the Papal Conclave, on October 26th, 1958. The lawfully elected Pope, Gregory XVII [formally Cardinal Siri of Genoa] accepted the office, but was illegally & violently pushed aside and replaced by a Freemason, Angelo Roncalli [A.K.A. Antipope John XXIII] who launched a new religion opposed to The Faith. -The Editor)

"In the center of Hell I saw a dark and horrible looking abyss, and into this Lucifer was cast, after being first strongly secured with chains; thick clouds of sulphurous black smoke arose from its fearful depths, and enveloped his frightful form in the dismal folds, thus effectually concealing him from every beholder. God himself had decreed this: and I was likewise told, if I remember right, that he will be unchained for a time *fifty or sixty years before the year of Christ 2000. The dates of many other events were pointed out to me which I do not now remember; but a certain number of demons are to be let loose much earlier than Lucifer, in order to tempt men, and to serve as instruments of the divine vengeance. I should think that some must be loosened even in the present day, and others will be set free in a short time." (End Times Prophecy of Anne Catherine Emmerich, 1774-1824 A.D.)

*"After the year 1900, toward the middle of the 20th century, the people of that time will become unrecognizable. Peoples appearances will change, and it will be impossible to distinguish men from women due to their shamelessness in dress and style of hair. ... When the time for the Advent of the Antichrist approaches, peoples minds will grow cloudy from carnal passions, and dishonor and lawlessness will grow stronger. ... The Churches of God will be deprived of God-fearing and pious pastors, and woe to the Christians remaining in the world at that time." (Source: 5th C. End Times Prophecy of Saint Nilus)

Satan's Strategy to Annihilate the True Happiness of Man

"Do not lose heart; victory will be ours." -Anne Catherine Emmerich

On the Importance of Devotion to St Michael the Archangel

"...you must labor and diligently take care that the faith may be preserved amidst

this great conspiracy of impious men who attempt to tear it down and destroy it."

The enemies of our Faith want to completely silence True Catholic Content/News. To keep being heard, TCW needs your help now!

To assist our ever more increasing battle and contribute to TCW, please click here.

The Editor & Staff of TCW